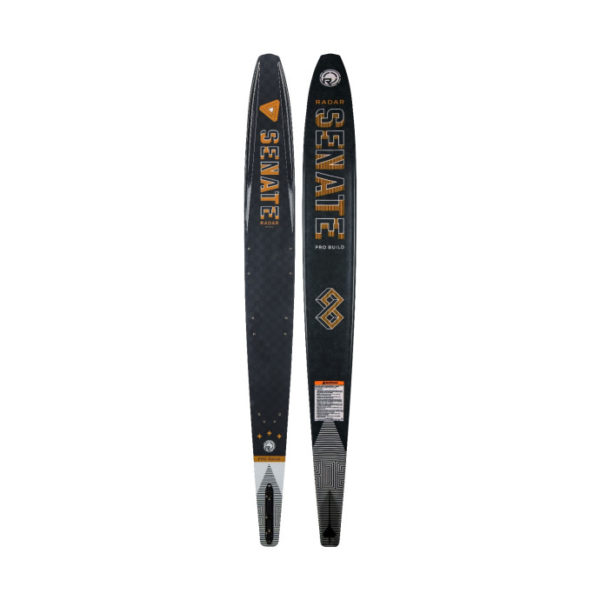 PMI foam is undoubtedly the lightest, most responsive foam on the market. We wrap that foam in Textreme spread tow carbon to make this 2023 Radar Senate Pro Build the fastest, most aggressive Senate we’ve ever created. Now those skiing 28-34 MPH in the course truly have a racecar of a Senate to write home about.

The 2023 Radar Senate’s ability to carry speed is unmatched in the industry. This speed allows the skier to maintain width on the boat ultimately giving a sense of freedom sought after by those that ski in the course as well as those ripping open water turns. By taking our Vapor shape and adding two tenths of an inch in extra width we have created a stable riding platform. This platform creates the balance needed for a skier to feel at home, while the profile of the ski allows the skier to feel the speed and angle sought after at any level.

PMI foam is undoubtedly the lightest, most responsive foam on the market. We wrap that foam in Textreme spread tow carbon to make this Senate the fastest, most aggressive Senate we’ve ever created. Now those skiing 28-34 MPH in the course truly have a racecar of a Senate to write home about.

The tip rocker on the new Senate starts just after the wide spot. This relieves tip pressure and increases forgiveness, allowing a skier to have a bigger platform to stand on coming into the turn. This also helps keep the ski keep moving outbound in the transition and makes the ski incredibly more predictable in the turns it creates. Moving back from the wide spot, the rocker lines are all new. These new lines create a ski with increased tail rocker which softens the way the ski rotates or carves through the turn. The result is a feeling of increased angle from a wider place with an instant acceleration.

At two tenths of an inch wider than the Vapor, the width of the Senate allows the ski to roll on edge at a moderate level. This width allows a skier to progress with ease as they instantly feel the balance and control of the bigger riding platform

PMI Foam is the industry leading core with its lightweight, reactive qualities. The use of PMI results in a ski that rebounds back to its original shape at a rate 10x faster than PVC which means quicker turns and an earlier acceleration out of the turn.

Textreme is a manufacturer of a spread tow carbon which allows us to reduce weight and increase strength. It most importantly provides us a more consistent flexing and a durable ski. Textreme has been utilized in everything from America’s Cup race boats to Tour de France bikes because of its powerful attributes.

Carbon Rods allow us to introduce Zonal Flexing. These hollow tubes create stiffness and strength in the ski where it is necessary without creating change in unwanted places.

CPD has created a plant-based bio resin that is changing the game. Utilizing a biofuel base that has 28% renewable resources allows them to create a resin with the same molecular makeup as a traditional resin. This means the same strength and performance that you are used to all while saving the planet, now that’s a win-win.

Utilizing a TPU base material reduces drag and increases waterflow. This allows the ski to carry more speed behind the boat resulting in earlier lines and easier turns in the slalom course.