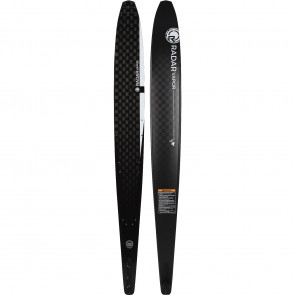 Pro Build designates a PMI Core and Textreme Carbon infused with Innegra. PMI is the lightest and most responsive foam money can buy, allowing a skier to get more attainable angle out of the turn and the ability to hold it through the wakes. Textreme lets the ski flex instantly and consistently, giving the skier more speed from a wider point. Overall, the 2021 Radar Vapor Pro Build ski will feel like it is carrying constant speed from the first cut to the last turn which results in the most effortless ride we’ve found to date.

The Vapor name has become synonymous with balance and speed. As we moved to our newest shape, we simply wanted to build on the foundation we had created. The overall width of the ski has been decreased in an effort to create more efficient water flow and allow the ski to have a more level ride. Rocker was modified to increase the drive behind the boat and allow the ski to create more angle before the buoy. Lastly, we increased the concave and let it run through the tail of the ski to give more support and consistency at the apex of the turn. All these simple changes allowed us to build a ski that is faster than its predecessor, has more automatic turns, and gives a truly consistent ride from turn to turn. You have to ski this thing, welcome to Vapor.