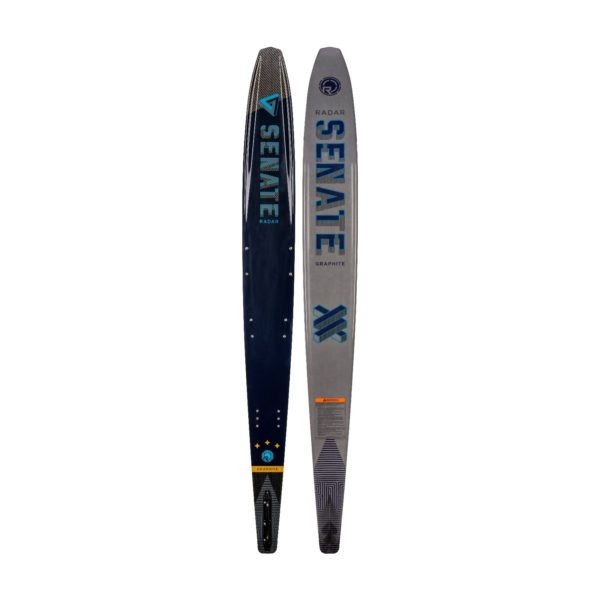 Our 2023 Radar Senate Graphite construction sits in the middle of the Senate range. A durable polyurethane core wrapped in carbon composites makes sure no turn is lost and only speed is gained, giving the skier more connection to the water. An absolute ripper in the course and on open water; this ski excels between 28-34 MPH.

The 2023 Radar Senate’s ability to carry speed is unmatched in the industry. This speed allows the skier to maintain width on the boat ultimately giving a sense of freedom sought after by those that ski in the course as well as those ripping open water turns. By taking our Vapor shape and adding two tenths of an inch in extra width we have created a stable riding platform. This platform creates the balance needed for a skier to feel at home, while the profile of the ski allows the skier to feel the speed and angle sought after at any level.

Our Graphite construction sits in the middle of the Senate range. A durable polyurethane core wrapped in carbon composites makes sure no turn is lost and only speed is gained, giving the skier more connection to the water. An absolute ripper in the course and on open water; this ski excels between 28-34 MPH.

The tip rocker on the new Senate starts just after the wide spot. This relieves tip pressure and increases forgiveness, allowing a skier to have a bigger platform to stand on coming into the turn. This also helps keep the ski keep moving outbound in the transition and makes the ski incredibly more predictable in the turns it creates. Moving back from the wide spot, the rocker lines are all new. These new lines create a ski with increased tail rocker which softens the way the ski rotates or carves through the turn. The result is a feeling of increased angle from a wider place with an instant acceleration.

At two tenths of an inch wider than the Vapor, the width of the Senate allows the ski to roll on edge at a moderate level. This width allows a skier to progress with ease as they instantly feel the balance and control of the bigger riding platform

Aero Core is our exclusive formulation of polyurethane foam. With an amazingly high strength-to-weight ratio these skis sit deeper in the water for a forgiving, consistent ride.