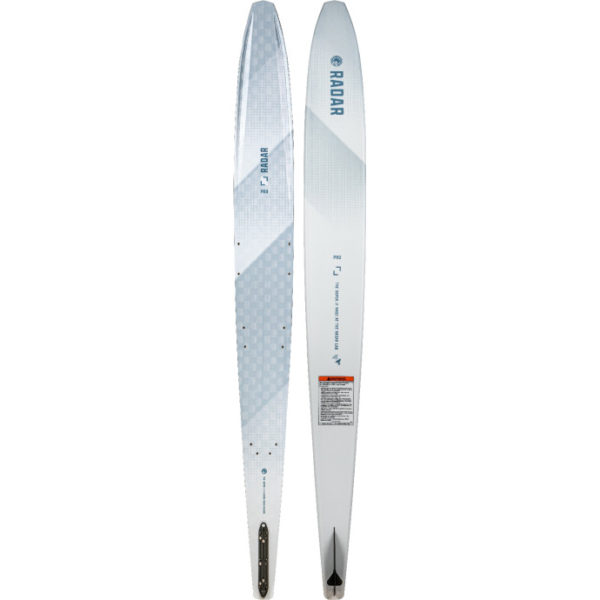 The 2022 Radar Vapor Pro Build is everything a competition skier ever wanted, designed to perform between 32-36 MPH and in the slalom course to elite levels. It’s our Pro Team’s model of choice but is also great for those looking to improve their skills at any level. By riding a 2022 Radar Vapor Pro Build you ensure that you have the best materials wrapped into the best shape on the market. Now all you have to decide is which color you like best.

The 2022 Radar Vapor reigns supreme when it comes to feel on the water. For 2022, we created a ski that feels truly automatic in the turns. Simply ride the line out to apex, release a hand, turn, and off you go to the other side. The ski can be turned from any position and has led skiers to say there’s no sweet spot, rather an infinite area to make incredibly tight turns. More side-to-side power combined with these automatic turns yields a softer, more flowy overall feel than any ski we’ve produced to date. The balance this ski creates allows a skier to make mistakes yet still move the ski underneath them to maintain speed and direction. This entirely new shape for 2022 will have you running earlier lines than you ever imagined; just rip and repeat.

Pro Build designates a PMI Core and Textreme Carbon infused with Innegra. PMI is the lightest and most responsive foam money can buy, allowing a skier to get more attainable angle out of the turn and have the ability to hold it through the wakes. Textreme lets the ski flex instantly and consistently, giving the skier more speed from a wider point. Overall, the ski will feel like it is carrying constant speed from the first cut to the last turn which results in the most effortless ride we’ve found to date.